Cleanroom coveralls usually also comprise a hood with integrated goggle. The hood may be attached to the rest of the cleanroom garment or worn with a shoulder part covered by the body part of the coverall. As such, the user becomes completely encapsulated by a relatively dense textile surface, covering the complete body of the user. At the inner side of the cleanroom coverall, a micro-climate environment is created. The temperature inside the garment may raise and the concentration of gasses like CO2 and H2O may increase gradually.

To keep the indoor atmosphere good enough for comfortable user activity, a cleanroom coverall that comprises a ventilator at the inner side of the coverall was provided by US2020/0359714. 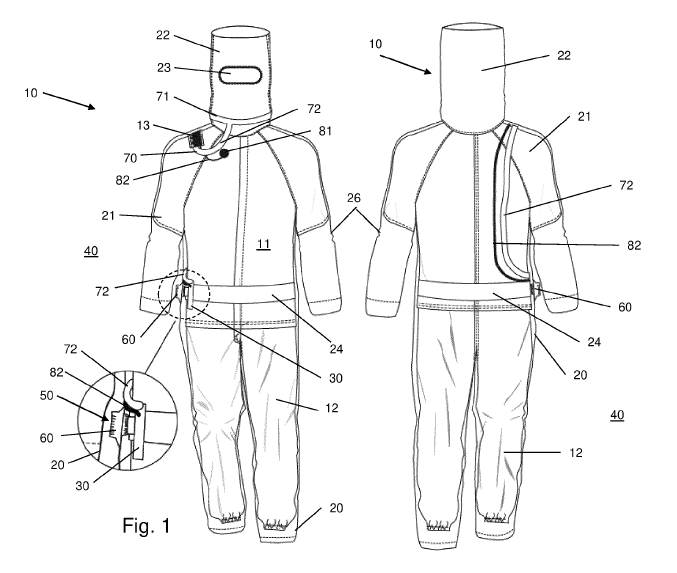 This cleanroom garment according to the first aspect of the invention has the advantage that upon interruption of the ventilator activity, upon blockage of the ventilator output or upon malfunctioning of the one-way valve, the risk on contamination flowing back to the ambient of the cleanroom coverall, is reduced or even brought to zero. As the one-way valve is situated before, upstream the ventilator, and preferably as close as possible to the coverall suit, the volume of possibly contaminated air which may flow back to the cleanroom environment, i.e. the ambient of the cleanroom coverall, is restricted.

As the one-way valve opens only upon activation of the ventilator, it means that in case of inactivity of the ventilator, either before or during use, no contaminated air can flow to the cleanroom coverall ambient. In case of a back pulse, this valve will close before the back pulse pressure has passed the valve, thus before it has had the opportunity to pass beyond the valve towards the ambient.

The one-way valve is present in the fluid guiding means present between the ambient of the coverall suit and the intake side of the valve.

Preferably the CO2 measurement device may be located near the chest of the user or near the neck of the user, such as near the upper part of the chest, e.g. near the left or right clavicle of the user or at the level of the thyroid gland of the user. This position was found to be most efficient and reliable to measure the content of the environment inside the coverall suit.

The cleanroom coverall may further comprise an alarm system. The alarm system may generate an alarm signal, such as a visual, tangible and/or auditive signal, when the CO2 value measured by the CO2 measurement device exceeds one or more threshold values.