Composites are materials made of at least two different materials. In structural applications, fibre-reinforced plastics - in which the fibres have been dispersed into a matrix - are commonly used.

The term "composite" not only includes fibre reinforced plastics but a whole series of materials or products composed of different components (concrete, asphalt, ceramic composites...).

Fibre-reinforced polymer materials consist of fibres, which have high strength and modulus, bonded to a matrix, which may have different physical and chemical identities.

Typical tests used to measure the mechanical properties of FRP:

The mechanical properties of FRP are determined by different factors including:

Adding high strength fibres to the plastic (resin) matrix not only changes the strength of the FRP but also other properties:

Reduction of crimp and warping behaviour at high temperatures and of creep under (continuous) load.

Certain high strength fibres such as glass and basalt fibres are highly resistant to fire and are therefore suited to improve the burning behaviour of plastics.

Carbon fibres in panels or structures may alter the detectability by radar waves (the radar transparency of CRP is used in military airplanes) and can also form a Faraday Cage to protect sensible electronic devices.

The presence of heat conductive fibres (eg. CF) can also accelerate the thermal process of forming and curing polymer systems.

Most plastics and high strength fibres do not conduct heat (or conduct it only very poorly). This thermal insulation of FRPs can be marketed as an advantage in contrast to materials reinforced with metal rods or cables. Many heat losses are indeed due to the presence of thermal bridges.

In contrast to most metal reinforcing materials (metal reinforced concrete), most reinforcing fibres and polymer matrices are corrosion-free, which makes them very suited for several building applications (pipes, reservoirs...).

Colour and resistance to ageing

Fibres can of course influence the colour of the composite (carbon fibres are black and basalt fibres have a golden hue) as well as the resistance to ageing.

Fibre reinforced plastics can be easily functionalised by means of coating, printing, laminating which may be advantageous in certain applications. It is possible to integrate smart materials and sensors.

RFID and other communication systems can be integrated by means of IML (In-Mould Labelling) techniques increasing the applicability of FRPs in new domains.

In a digitalised world governed by the "Internet of Things", functionalised composites will be playing a major role.

The transportation of people and goods depends on several means and products including:

In most of these market segments, FPRs can be applied. Thanks to their specific properties such as light weight they may reduce the environmental impact linked to mobility and transportation. By reducing the weight of transportation means one can significantly restrict fuel consumption and hence the CO2 emission of cars, trucks and planes.

Major aircraft manufacturers have already greatly reduced the weight of their airplanes by substituting metal components by carbon fibre reinforced plastics and other composites in structural and non-structural components.

Although the car industry has also replaced non-structural metal components by FRPs, the overall weight of cars has not been reduced. More powerful engines and the incorporation of comfort and safety systems have even added to the final weight of cars. However, by using FRPs this increase remains within boundaries.

The great challenge is not limited to the application of structural composites in cars, but also involves the development of "smart" composites able to take over a whole series of electrical, mechanical and electronical functions that are now mainly provided by heavy and complexly composed systems.

Available and affordable energy is essential to ensure our comfortable way of life. House heating systems, daily household activities, mobility, industrial production, medical examinations... all depend on massive energy consumption. Because this modern and energy intensive society is shared with more and more people on this planet, energy supply is a major societal challenge.

At this very moment, most of our energy supply is still based on the exploitation of exhaustible energy resources (fossil fuels, gas, coal). To secure the energy supply in the long run as well as to reduce the environmental impact and health risks linked to it, a massive switch to renewable energy sources and low energy processes is required.

The first windmills of the 1980's had a rotor diameter of about 15m and a relatively small power output (50 to 100kW). In 2013, the average windmill rotor had a diameter of about 100m generating about 2,5MW. A two megawatt wind turbine generates an average of 4 million kWh/year, which corresponds with the energy consumption of 1300 households.

The increasing size of wind turbines has several consequences:

The use of appropriate FRP and core materials adapted to the task are essential in further developments of rotors and blades.

Corrosion-free GRP composites are very suited for SWH: pipes and reservoirs made from composite materials are indeed highly resistant to (very) hot and mostly corrosive water.

Seas and oceans enclose energy that can be harvested by

The enormous forces at sea and the influence of seawater can damage the floating (offshore) systems. Fibre reinforced plastics are stronger and more resistant to corrosion than steel are therefore very suited materials for these applications (stations, structures and piping...).

The construction market not only includes the construction of private or public buildings, but also other infrastructural constructions such as viaducts, roads, bridges, car parks, harbours, pipelines, etc. Although it is an important consumer of FRPs, the sales volume of glass-fibre, carbon-fibre reinforced plastics (GRP and CRP) as well as of Wood-Plastic Composites (WPC) still remains rather low in comparison with other construction materials.

This is mainly due to a lack of a profound knowledge of the advantages of FRPs, especially in the field of sustainability: 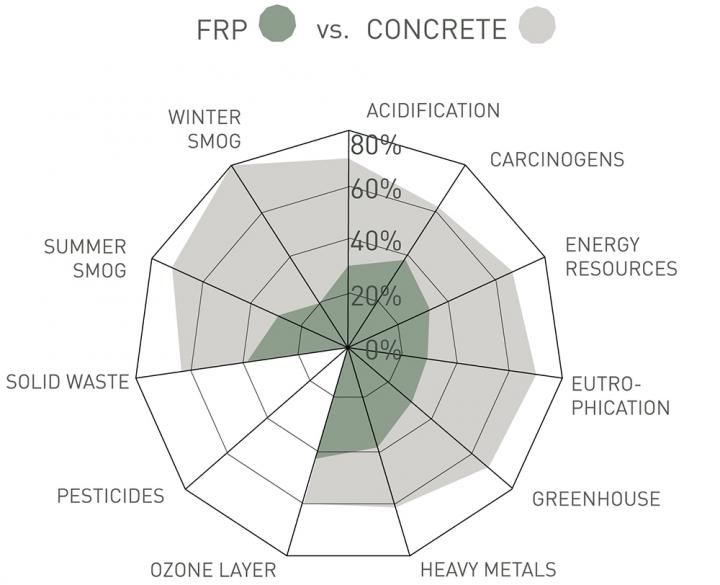 Sustainability is a popular and important issue facing designers, builders and building owners. Unfortunately, it is also complex. Recent developments have shown that programs such as LEEDS assessments do not always reveal the correct or best decisions about material selection or building strategies. The more appropriate but also more rigorous method is “Life Cycle Assessment” or LCA’s where a material’s total, cradle to grave environmental impact is compared to an alternative. These exercises are complicated and project specific. For example, often the weight of a product plays a significant role in impacts like transportation, installation, and back-up structure. All these factors vary from project to project and to measure all these factors is usually beyond the scope of most conventional construction projects.

Innovation opportunities for FRPs for the construction market:

The strength, lightweight and adaptable/flexible design of FRPs are major assets in the development and production of "assistive auxiliary devices". The growth of this market segment is linked with the ageing of the population. To keep the healthcare related costs under control it is important that the elderly live at home as long as they possibly can. This requires, however, that several appropriate devices are available to them that will assist them to answer their mobility, communication and personal healthcare needs.

By using carbon fibre reinforced plastics - instead of metal components - it is possible to reduce the weight of both simple (spectacle frames, walking canes...) and complex devices (wheelchairs, rollators, walking assistant robots...). Reducing their weight while preserving their necessary strength will simplify their use, folding, storing...

The design of assistive devices, especially the ones used during care activities, must be adaptable to answer to a person's comfort related and ergonomic needs.

The affordability of devices within the healthcare sector remains a major challenge.

FRPs, in general, are difficult to recycle due to their multiphase nature, typically containing three or more components: fibre reinforcement, resin matrix and fillers (typically calcium carbonate, CaCO3). Various recycling technologies have been proposed but none have proved economically viable. In many cases, the price of raw material produced from recycled composites is considerably higher than the prices for virgin reinforcements and fillers.

Recycling of thermoset FRPs presents an especially difficult challenge because once the thermoset matrix molecules are cross-linked, they cannot be melted or reformed. Thermoplastics, on the other hand, are inherently recyclable. Further, the value of the material constituents of GRP reclaimed from recycling is low. Hence there is little monetary incentive to recycle.

Because of the long lifespan of FRP products (expected lifespan of wind turbines is estimated at ± 25 years, buildings > 50 years, aircrafts > 30 years) with the usual exceptions to the rule (cars ± 10 years, sporting articles ± 5 years), E+E (< 5 years) - there are no large quantities of FRP-EOL wastes available for recycling and valorisation. The selective collection is not obvious since many FRPs are components of larger items (cars, devices, installations, constructions...). In addition, many FRPs are hardly to distinguish visually from regular plastics.

Recycling companies are not (yet) equipped to identify, dismantle and sort FRPs products for further recycling (eg. robotisation for dismantling C-waste).

European legislation is steering the recycling of both PP and PC-FRP waste streams, focusing on:

Recycling of regular FRPs with the existing recycling techniques is only economically viable in the case of sufficiently large quantities.

Compatibilizer additives allow resins that would not neatly blend and bond in a way that creates enhanced performance when compared with either polymer alone. The use of compatibilizers is being explored increasingly in the recycling industry as a way to create value in mixed feed streams.

Compatibilizers have a hybrid nature: part of it is compatible with substance A, another part with substance B. Compatibilization is based on the physico-chemical interactions of these substances with the hybrid material.