reused and recycled to the thread

Former Centexbel Consultant technical textiles, Daniël Verstaete, on the results of the RETEX project in the field of cotton/polyester recycling.

In contrast to other waste streams, apparel/clothing is not commonly regulated by extended producer responsibility schemes regarding waste disposal.

Aside from municipalities and commercial companies, charity organisations are also active in the collection and redistribution of discarded apparel. A reason for voluntary collection seems to be that many people have ethical concerns about disposing of still functionally useful clothing and are consequently keen to donate for charity. However, the collected items are an asset and only a small fraction is distributed for free to people in need. The majority however is sold on the market.

Prevention is the highest ranked option in the European waste hierarchy and must also be applied to textiles. However, the business model of the fashion industry is based on a rapid change of clothing. Customers are supposed to buy new items each season in order to comply with current fashions.

Any reuse of textiles is only possible if they are not contaminated by residual waste. Textiles will pick up humidity or dirt that will prevent any reuse. Second-hand clothes have to be dry, clean and not worn.

Collected end-of-life textiles need to be sorted for reuse. The aim is to reject non- reusable items and waste from second-hand clothing. Reusable clothing itself is further divided into subgroups. As sorting is a manual and labour intensive process, it is frequently carried out in countries with lower labour costs.

The separate collection of end-of-life textiles requires energy for transport, sorting and packing. It has been determined (Woolridge et al. (2006)) that the energy consumption amounts to about 6 GJ/t and is thus much smaller than the energy required for apparel production.

Second-hand clothing shows the largest potential to save energy and resources. As the complete production chain for new clothing can be avoided, up to 330 GJ/t of energy can be saved. The fraction of reusable items is limited and slightly exceeds 50 %. Reuse means using the items again for the same purpose for which they were conceived (EC 2008). When clothing is considered to be the product, the prerequisite of re-use is fulfilled if the items are used again for apparel purposes. However, the fabric could be seen as a product, thus the production of cleaning & wiping rags (CWR) belongs to the wider category of reuse. As the production of new fabric can be avoided, the energy savings are around 200 GJ/t. 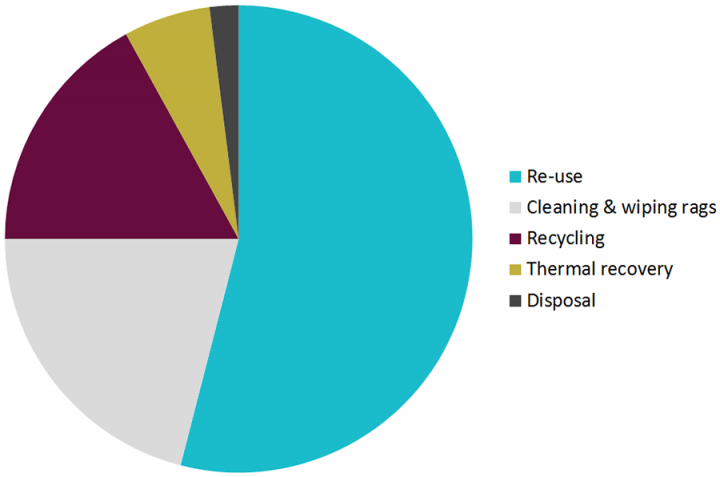 Like plastics, synthetic fibres are polymer products (the chemical composition of PET bottles being identical to the one of polyester fleece) and produced through an extrusion process.

Polyester/cotton is commonly used in all sorts of textile articles and is in fact a kind of functionalized plastic, in which the cotton fibres enhance the wearer's comfort and the polyester reinforces the fabric and makes it dry more rapidly.

The polymer nature of many textile products is interesting in the context of a circular economy. Thermoplastics that are used e.g. in plastics, synthetic fibres, nonwovens and composites, can be melted over and over again. The recycled matter can be used in the production of new plastics, synthetic fibres and/or fibre reinforced plastics. Unfortunately, the instances where this cross-sector approach of recycled textiles is in place are still too insignificant.

The most recent EIPRO (Environmental Impact of PROducts) study mapping the environmental impact of different goods, indicates that clothing is responsible for 2 to 10% of the total environmental impact without even reckoning with the environmental impact of textile cleaning.
Fashion and its fast changing trends are catalysing the specific textiel consumption (in Europe - depending on the country - betwee 6 and 16 kg/year/inhabitant). By continuously renewing collections (sometimes up to two times per month) the “prêt-à-porter” chains generate an enormous material wastage. Many initiatives of large brands, allegedly aimed at recycling, are nothing else than marketing claims and leading to the dumping of collected clothing that can no longer be sold in Europe to developing countries, to the detriment of the local textile production.

In the long term, this situation cannot persist. Discarded textiles must be (entirely or partially) reused or recycled into new materials or raw materials that are best applied in the local production of new products.