This principle has mainly two disadvantages. Firstly, it is necessary to move the shuttle successively in both directions to weave a full revolution. Two weaving picks are necessary to complete one cycle or one full revolution. Secondly, many threads are moved up and down at every passage of the shuttle, thereby possibly creating friction and deterioration of the threads. The detrimental effect of friction does not allow to weave with delicate yarns and/or high density of warp threads, as can be required for medical application. For example, tubular fabrics can be used for manufacturing stents for inserting into the lumen of an anatomic vessel. Knitted fabrics have been used but a further coating is needed on the fabric to compensate for the low density of fibers to reach the expected performance of blood impermeability. Compared to knitting, weaving allows to produce much denser fabrics. However, for such applications, the yarns must be made from small filaments, that tend to degrade easily and protrude from the yarn upon repeated frictional rubbing, making the tubular fabric not compliant for such medical applications. The applicant has therefore judged necessary to develop a new process for weaving tubular textiles to minimize the friction between yarn and optimize the weaving efficiency.

The invention relates to the field of closed edge multilayer fabrics woven on a shuttle loom, especially seamless tubular fabrics in which a weft goes in an uninterrupted way from left to right and back. It discloses a method particularly suited to weave high density tubular fabrics with fragile fibers, for example to manufacture high quality tubular fabrics for medical applications.

The invention relates to a loom and a method for weaving multilayer or tubular fabrics. The loom is arranged such that a shuttle for inserting a weft thread in between warp threads can operate a right and a left translation along two distinct lines. The shuttle thereby describes a circular movement, the warp threads are spread over three lines, thereby minimizing the friction between threads during the operations. The loom comprises means to displace the shuttle from one operating line to the other, by either rotating or translating the shuttle. To improve the production, two shuttles can operate at the same time.

A multilayer fabric designs a weaving work where at least two layers are manufactured simultaneously, possibly linked to each other while weaving. Preferably, the multilayer is a bi-layer fabric. In particular, a multilayer fabric can be a tubular weaving work, i.e., two superimposed layers connected along each side of the weaving work. The invention does not relate to double cloth construction where two separate fabrics, are woven in the loom at the same time, one on top of each other, one on each operating line, but to the weaving of a single fabric that can have a specific arrangement with several layers in the weaving construction in order to confer the fabric a three-dimensional structure once finished.

Typically, the multilayer fabric is still decomposed in a top layer and in a bottom layer as a result of the weaving steps. The warp thread of the half of the tubular fabric (the top layer) can alternatively be positioned in an up- or in a median-position, while the warp thread of the other half (bottom layer) can alternatively be positioned in a median- or in a down-position. This arrangement involves much less thread crossing and limits the deterioration due to the friction caused by these thread crossings.

To further increase the efficiency of the weaving process, advantageously, the loom comprises two shuttles, arranged for operating a right and a left translation along the two distinct parallel lines. This is allowed by the fact that each of the right and the left movements are not happening on the same line, but rather each shuttles follows a circular path. One of the parallel lines is for a right translation while the other parallel line is for the left translation. 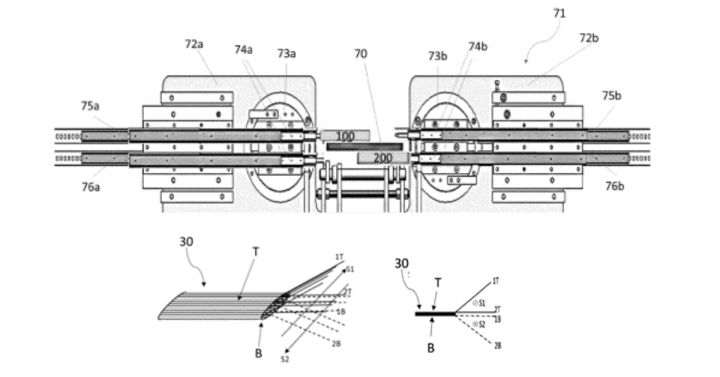 To further increase the efficiency of the weaving process, advantageously, the loom comprises two shuttles, arranged for operating a right and a left translation along the two distinct parallel lines.