The ability of such products to acquire, distribute, and store bodily fluids (urine, sweat, feces, liquid stools, blood and menses) is obviously important to their function. Historically, this has been primarily achieved by using high lofty nonwovens and cellulosic fibers and/or superabsorbent particles. This approach has, however, encountered a number of difficulties in achieving efficient removal of fluid from the body of the wearer and storage away from the wearer, leading to visible stains on the body facing side of the articles, as well as in providing proper flexibility and comfort, i.e. by following the user's movements and the shape of the body when being worn.

In the past decade intensive research and development has been carried out in the development of foams designed for disposable personal hygiene products. However the speed at which the absorbent article absorbs liquid is low.

Therefore it is needed to further optimize the efficient fast absorption of body exudates (to help preventing leaks), and reduced rewet (which offers a drier feeling for the wearer), at a reduced cost.

A limited amount of superabsorbent polymers, e.g. fibers or particles, may be present in the part of the foam layer between the nonwoven fabric and the foam layer bottom surface. The quantity of superabsorbent polymers is preferably sufficiently low to avoid any curling of the absorbent article, for example less than 20 gsm. Advantageously the SAP included in the foam are selected to be permeable to prevent affecting the acquisition time of the absorbent article, and/or to have a low CRC to avoid a too strong swelling and to reduce the gel blocking effect. The SAP comprised in the nonwoven may on the other hand be selected to have a higher CRC. The SAP included in the foam may thus show a higher permeability and/or a lower CRC than the SAP comprised in the nonwoven.

The foam layer may have a maximum thickness of 5, 4, 3 or 2 mm or less. The thickness of the raised non-compressed portions is preferably between 2 and 3 mm, and the thickness of the indented compressed portions is preferably between 0.7 and 1.5 mm. The foam comprises an open cell polymer foam, more preferably foams selected from the group consisting of polyurethane (PU), poly vinyl alcohol (PVA), polyolefins such as low-density polyethylene (LDPE), ethylene-vinyl acetate (EVA), ethylene butyl acrylate (EBA), open cell silicone foams, natural and synthetic rubbers, and mixtures thereof, most preferred being aliphatic polyurethane foam. These may be either hydrophilic or hydrophobic, at various degrees of hydrophilicity. 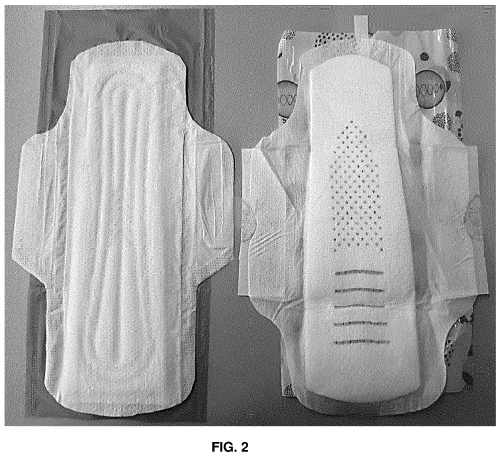 The profiled surface of the foam layer according to the present invention may be in any compressed, relief pattern or shaped design. However, certain shapes and designs are described below as being associated with particular technical advantages.

The indented compressed portions may have a width of greater than 1 mm, preferably greater than 2 mm. An advantage of this configuration is that liquids can more effectively and quickly be distributed over the foam layer and also to account for deformation of the foam upon swelling in wet conditions so as to retain its general overall shape and limit excess deformation that could lead to discomfort when worn by a subject.

The openings may be of any shape, e.g. circular, ellipsoidal, rectangular, slit, slot, preferably circular. They are preferably present in the indented compressed portions to compensate for the reduced capability of penetration of liquid in these portions. Their maximal dimension, e.g. their diameter in case of circular openings, is advantageously equal or smaller that the width of the indented compressed portions. The openings are preferably present in the central portion of the absorbent core, close to the exudate inlet point, for a rapid intake of fluids towards the bottom surface of the foam layer and the further nonwoven layer joined to the bottom surface of the foam layer. There may be more than 3, 5, 8 or 10 and/or less than 30, 25, 20 or 18 openings.

Suitable top sheets may be manufactured from a wide range of materials including, but not limited to nonwoven materials, apertured formed thermoplastic films, apertured plastic films, and hydroformed thermoplastic films; reticulated thermoplastic films; thermoplastic scrims; and film/nonwoven laminates. Suitable nonwoven materials can be comprised of natural fibers (e.g., wood or cotton fibers), synthetic fibers (e.g., polymeric fibers, such as polyester, polypropylene fibers, and polyethylene, or polyvinylalcohol, starch base resins, nylon, and rayon fibers) or from a combination of natural and synthetic fibers. Apertured formed films and film/nonwoven laminates are generally preferred for the topsheet because they are pervious to liquids and, if properly apertured, have a reduced tendency to allow liquids to pass back through and rewet the wearer's skin. Films may also show better results in terms of run-off. Polyethylene (PE) films and laminates comprising a nonwoven and a PE film are most preferred.