A closure for a textile product

Zippers, buttons or hook-and-loop systems are used to close garments. For some applications, however, the closure of a textile product is more critical and has more requirements than joining two textile surfaces.

For firemen jackets, the closure of the jacket at the front side of the jacket must be reliable, watertight and fire resistant. A simple zipper system does not suffice. A strip of textile is used to cover the zipper, to couple the left and right front part of the jacket one to the other. The strip of textile, once provided in front of the zipper system, may be held in place by, for instance, a hook-and-loop system, better known as a Velcro system. Closing and keeping the closure closed ensure the jacket fulfils its function of protective wear also along the zipper part. If for whatever reason the closure is not correctly closed or kept close, the fireman's safety is put in danger.

For soldiers and policemen jackets, in particularly for soldiers of special forces, it might be deadly important that a textile closure, e.g. a closure of a pocket, opens and closes without any sound. A sound may give away information on their presence. However, in order to keep the stored equipment in a pocket of such jacket or battle dress, the pocket needs to be kept close with certainty at all times.
Therefore, there is a need for a textile closure which gives a.o. certainty as to its closed position at all times, and/or which is silent to open and/or close. The closure is to guarantee a closed position and/or should return to a closed position without intervention of a person. 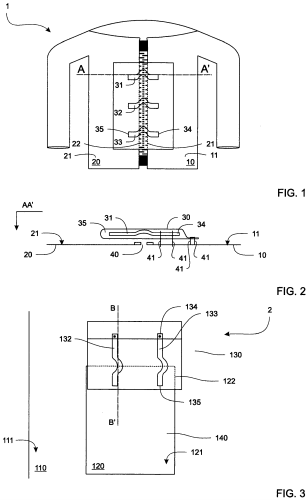 The present invention generally relates to closures of textile products, such as garment, e.g. jackets, in particular protective garment.

The invention further relates to the use of the closures in garments, particularly protective garment, such as jackets and double jacket systems.

The invention relates in particular to suits and jackets for firemen, soldiers, policemen and persons working in potentially hazardous environments such as on chemical and petrochemical plants.

Between the two edges, a space may be provided which space needs to be bridged by the textile strips. The two edges of the first and second textile surface may be mutually parallel, even being equidistant one to the other along part or the whole of the length of the edges.

The use of a spring, in particular a torsion spring or bistable spring, is preferred as it is fairly easy to install in the textile product and is reliable as to the force it provides on the first side of the second textile surface by the first textile strip.

The closure according to the invention has the advantage that it may close very silently and smoothly.

Therefore, there is a need for a textile closure which also gives certainty as to its closed position at all times, and/or which is silent to open and/or close.